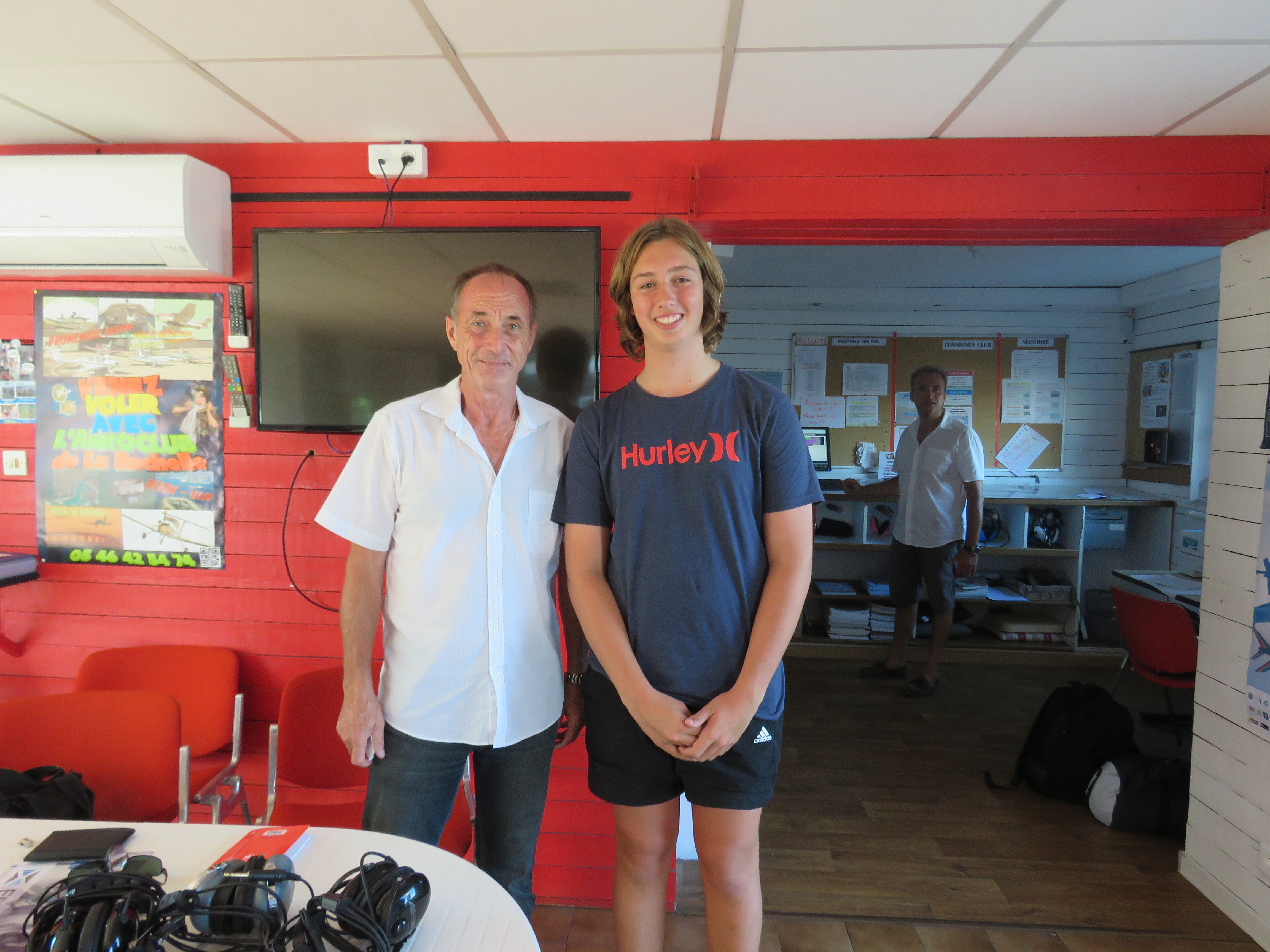 During the month of July, I went with two other students to l’Île de Ré on exchange. We each stayed with a French family and spent four weeks riding bikes around, going to the beach, meeting new people and, of course, speaking French. I stayed with the Trouvé family, including the mother Séverine, the father Bastien, and the two boys Paul and Louis. Louis came to Esperance on exchange last year, so he spoke quite a good amount of English, as did his parents. This was helpful in my first few days, when I was still adjusting, but as the month went on I spoke only in French. My host parents ran a holiday park in the town of Saint-Clément-des-Baleines, at the westernmost end of the island, about 30 kilometres from the mainland. I was there during the holiday season, so Séverine and Bastien were very busy working. The highlights of my trip were the scenic flight around Île de Ré, taking the TGV (high-speed train) to Paris, seeing the Eiffel Tower, and, of course, speaking lots of French. I would like to thank the shire for funding the exchange and I encourage French students to go on the exchange.

You can view a video of Liam's experience here.

Bonjour je m’appelle Dana sharpe, je vienne de la ville jumelle de il de re, Esperance un Australie. That was how I started my speech in France when I arrived in July for my one month student exchange program.

My name is Dana Sharpe and I was one of the students lucky enough to be given the opportunity to travel the many numerous hours to reach the destination of Île de Ré, France. Going to France I was both excited and .... Well overly nervous to the point of tears, you can ask anyone at the Perth airport. Upon arriving at the Paris international airport I was giddy with joy, that was, until I saw the police oﬃcers everywhere carrying huge guns looking at me like I did something wrong, which I’m sure I didn’t. But then I realised that increased airport security is a fact of life these days.

When going through customs, where they stamp your passport, I had no idea what to do,  I followed the boys and when the people were talking fast to me in French I nodded  saying oui, oui, oui and just walked on, pretending I knew what they were saying. That I’m glad to say was the scariest moment of my trip. From there on the trip was honestly a   blur, of course an amazing one. I took photos non stop. My first ever anticipated sighting   of the great, known Eiﬀel Tower was through a tiny, foggy van window. When arriving at where we stayed the first night my dinner was a very traditional French one. I was served up a meal for one and I could barely eat it all, as everyone around me gobbled down seconds and thirds. This was the first thing that I learnt while in France…. they eat very big meals and they love their food. 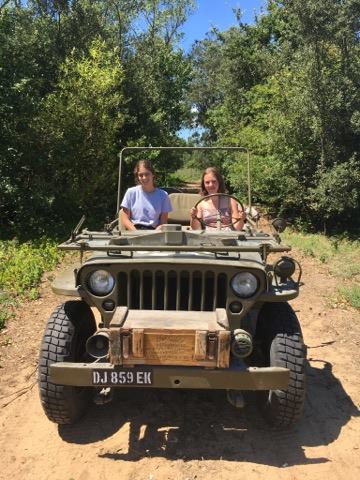 When we arrived in Île de Ré, the weather was beautiful and sunny and I was introduced to my lovely host family, Fred, Evelyn and my host sister Eloise and I was shown around. Coming from an Aussie family where we eat meat everyday, sometimes twice a day, and going into a French home where the daughter was a vegetarian and all the food was organic, well that was a tad diﬀerent. Every night the table was full of food, delicious I’m sure it was but it was all vegetables! So my basic diet was well... diﬀerent to what I was used to, and about one week into my stay I was granted a gift from the heavens, I got salami. I have never liked salami so much in my life.

Fred my host dad, every day would tell me about the organic tomatoes, the organic  lettuce or this or that, the fact was everything was organic. I was even lucky enough to help him in planting some organic food in his garden. The rest of my experience was filled with driving 1940’s willies jeeps, running through sunflower fields, paddle boarding,   gliding down green rivers, going to medieval shows, having picnics on the beach, running around Disneyland and lots of bike riding.

From the beginning of the trip my diet consisted of mainly vegetables and fruits. I remember messaging my mum saying that I have been so healthy, and that I would come back to Australia eating better food then when I had left. That was until I walked down  a few streets and found the local markets, I browsed the isles and right up the back I discovered Nutella. From then on my healthy eating went down hill.

One of the most, physically exerting and mentally scaring exercises I did was bike riding. Two days after I arrived in Île de Ré, I went for a bike ride. “It’s only a short one” Eloise my host sister told me as we headed oﬀ. I don’t think I have ever ridden so far in my life in a four week period. And though I look back now and think, well done Dana, at the time I thought I could have totally lived without it. One day, we went for a ride and wow I tried so hard to keep up with everyone, they were all just casually riding a head of me with ease, calling back to check if I was okay, I replied yes, but that was an honest lie. I peddled on, sweat coating my brow and my legs burning, but my mind was focused on the ice cream   at the end. When we went riding I would try not to stop for the whole 30 kilometres in fear of not being able to start again as my legs were like jelly. But it was a good learning experience.

One of my other scary experiences, though absolutely amazing, was going on a plane ride over Île de Ré. As we flew, the view was amazing but right at the end, before we landed I thought the pilot had had a heart attack and the engine had stopped, the person next to me was looking like he was about to vomit and pass out and I knew with 100% certainty that if he was sick then I would be too. Thankfully it was a false alarm. Turns out the pilot was fine and the engine was still on.

Coming from Australia where we have a sausage on the barbie for celebrations, in France they have crepes with Nutella, we drive past yellow paddocks full of canola, and they  have fields full of bright yellow sunflowers. There were so many similarities between France and Australia and I am so grateful I was lucky enough to experience that.

Before going to France I liked bread, greatly disliked cheese, and had almost no opinion on any other French food. Coming back I am addicted to bread, continue to greatly   dislike cheese, and I am crazy in love with baguettes, crepes and ice cream, the people of France are so passionate about food.

During my time full of fun adventures and new memories and experiences I was also  lucky enough to participate in the Bastille Day parade and to lay a wreath. Getting to learn about the culture and history of Île de Ré for me was a huge highlight, my host father would always tell me something new about the island each  day.

Before I left Esperance, I was nervous about not being able to speak the language, but in the end I had no problems at all. This experience was about representing Esperance and

learning and I believe that is what I did. I met amazing people and saw amazing places, I learnt a few words but more importantly I made great memories and friendships that I’m sure will last a lifetime. Lots of people spoke English and communication was so simple and easy. You would be surprised the similarities between English and French. Overall I am so thankful to the Shire of Esperance and the Lions Club for giving me this truely amazing opportunity to go to France and have the best time of my life. This will be an experience I will never forget and I felt great pride being able to represent the Esperance community.

The beauty of each and every place I went to is honestly indescribable, it is impossible to describe the old buildings, the cobblestone paths and the kindness of the people. But I know if ever given the opportunity go to France again I would not  hesitate.

And my one word of advice to the youth of Esperance would be, to not hesitate and make sure you apply, as this is a trip of a lifetime. It is not about being able to speak fluent French before you go, it is about representing the Esperance community and going with  an open mind and a willingness to learn and making new friendships and memories that will last a lifetime. It is all about furthering the goodwill between, and increasing the friendship between Île de Ré, France and Esperance. There is so much to learn while there, not just on a local level but also on an international level. The area of Île de Ré and France is so rich with history that you will be able to learn something new  everyday.

So now I am back home in Esperance and looking forward to doing my bit in return, and that will be, hosting a student from Île de Ré, France when they visit Esperance in July 2018. And I cannot wait, to show them what Esperance has to oﬀer, beautiful beaches, fields of canola, a meet and greet with the local kangaroos at Lucky Bay and of course the people that make the amazing Esperance community what it  is.

Thank you very much.