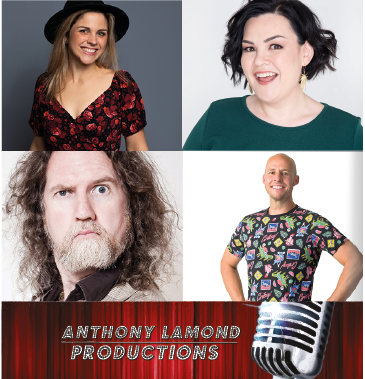 Comedy Gold is back for it's ninth consecutive year and is jam packed with some of Australia's funniest and most recognizable comedians. This comedy gala show is ready to take Western Australia by storm this August when it tours from the city edges as far out to Kalgoorlie, down to Esperance before making it's way back to Perth again.
Award winning comedians have been carefully selected to entertain audiences of both genders and all ages 15+. It’s a three generation show, Grandma should be there with her Children and Grand Children.  The content is edgy but doesn’t cross the line. It’s that type of show.

This years line up will again have you in stitches and rolling in the aisle with laughter.

Your M.C for the show is the amazing Dave Callan. The one-way people recognise comedian Dave Callan is because of his beard and long hair. Many people want him to shave but it is his trademark. He thinks it will be very fashionable when the new Ice Age comes.

Dave Callan is easily the hairiest comedian in Australia. He’s a versatile and highly entertaining comedian, writer and performer, who is commonly mistaken for Chewbacca, Jesus and The Wild Man from Borneo.

Born in Ireland, Dave moved to WA when he was 8. Apart from performing stand-up comedy in Perth, he did a series of ads in WA for WA Home Loans and Fruitisma. He didn't move to Melbourne until Rove McManus asked him to help him out with his new TV show, Rove Live.

His other TV credits include O'Loghlin on Saturday Night, the ABC’s Standing Up and The Melbourne International Festival Comedy Gala and the SBS documentary – King of the Road. Dave has also appeared on Spicks and Specks, The Footy Show, and Hey Hey It’s Saturday.

Also joining the party will be Pony, who is a Triple JJJ RAW state finalist and member of award-winning Perth comedy sensation The Motherhood. Pony is one of the most exciting new voices on the scene. As a bush kid, mum, FIFO wife, teacher and survivor of three brothers; her performances are down to earth and packed full of relatable content.

Your next comedian is Western Australias adopted son, Benny Darsow. Darsow delivers a playful blend of observational and improvised standup.

Benny hosted the 2018 Sydney Comedy Festival Galas and in both 2017 & 2016 he was nominated for Best Comedy in Perth Fringe World Festival.

Originally from Adelaide, Benny creates a fresh show each year for the Australian festival circuit & follows this by headlining and hosting the top comedy clubs in Australia including The Sydney Comedy Store, Perth’s Comedy Lounge and Brisbane’s Sit Down Comedy Club.

“erudite…super-chilled and a natural on stage”

KYour feature act will be Janelle Koenig, who has been funny since – well – birth but her career in comedy started more than 15 years ago when she was discovered at the inaugural Jeez Louise Funny Women's Forum.

She's performed at festivals around Australia and the world, laughing her way around the country from Marble Bar to Moe and Broad Meadows to Broome. Janelle knew she was really hitting her strides in February 2008, when she was hand-picked by NBC as one of only two Melbournian comedians to represent Australia in Last Comic Standing in Miami, Florida.

In 2010, Janelle relocated permanently from Melbourne to Perth, Western Australia where she snagged a gig as one half of Mix94.5 duo The Jam with Janelle and Sam, and also contributes her hugely popular weekly segment 'Mum's The Word' to the breakfast show. Janelle is the TV columnist for The Sunday Times newspaper, and is a constant fixture on the local Perth comedy circuit and Fringe World scene.

Janelle has been Joel Creasey's business partner for over five years (nothing to do with finances - she just knows all his business), and has been Joel's writer and director his last 5 shows. Janelle and Joel also just completed Joel's autobiography 'Thirsty', due for release late 2017.

Along with comedy writing for Joel, Janelle has also written for Em Rusciano, Effie (Mary Coustas) and the incomparable Jimeoin.

Janelle is an accomplished comedian and a mediocre guitarist. Her unique blend of honest stand-up, cheeky songs and sometimes far too personal tales about all aspects of her own life have made her a favourite amongst Australian audiences. She's proud to consider herself a 'real woman' but keeps her skinny jeans 'just in case'.