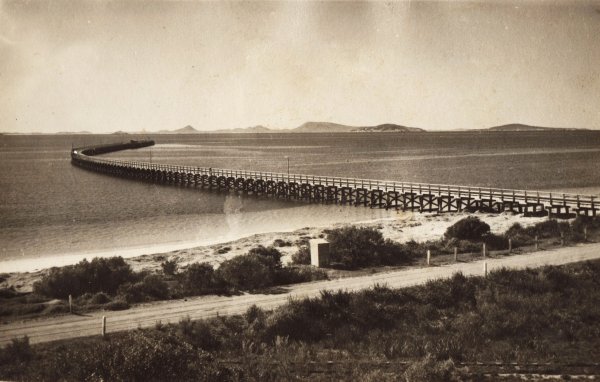 In February 2016 Council made the difficult decision to authorise the deconstruction of the Esperance Tanker Jetty. The Jetty was closed to the public in December 2015 after the Shire was provided with a structural assessment identifying several vital structural components that had either failed, or were about to fail, in at least four different locations along the length of the Jetty. Coastal Engineers recommended the immediate closure of the Jetty due to its unsafe condition.

Information about the Jetty and the processes that have been undertaken prior to its closure can be found in the following fact sheets:

In February 2016 a Tanker Jetty Replacement Survey was conducted to obtain community input on what a replacement jetty should look like. The survey allowed diverse community opinions to be collected and analysed to assist in future concept designs and guide decisions that need to made for the benefit of the whole community. A summary of the Survey results can be found here.

Following the survey two concepts were developed and showcased at the Esperance and Districts Agricultural Show on 14-15 October 2016. Information about the Replacement Jetty Concept Designs can be viewed here and a Concept Design Information Sheet, which summarises the concepts can be downloaded here.

A third concept (restoration option) was developed by the Jetty Group Inc. was received by the Shire on 31 October 2016 and presented to Council on 8 November 2016 along with a Peer Review prepared by GHD and analysing the information provided in the Bonacci Infrastructure's Jetty Remediation Report and the BMT JFA Esperance Jetties Condition Assessments: Condition Assessment and Maintenance Strategy Report. The Agenda, Attachments and Minutes for the meeting can be viewed here.

Save Our Jetty Petition

The Jetty Group Inc. delivered the Save Our Jetty Petition to the Shire on the 31 October 2016. The document was presented to Council at a Special Council Meeting on 8 November 2016. It did not meet the legislative requirements of a Petition; however Council acknowledged the local and regional interest in the Esperance Tanker Jetty. The Save Our Jetty Petition can be downloaded below in two parts.

Save Our Jetty Petition Part 1

Save Our Jetty Petition Part 2

Throughout the past six years, a variety of reports have been prepared assessing the Tanker Jetty's structural condition. They have been provided below in chronological order.

Technical Note: Feasibility of preventing potential collapse of the Tanker Jetty superstructure - May 2018

During August 2016, the Minister for Heritage received a request to consider placing a Conservation Order on the Jetty and gave the Shire an opportunity to provide a written submission on the matter.  The Shire opposed the proposed Conservation Order and provided this submission as a response.

In January 2015 the Goldfields Esperance Development Commission (GEDC) received a report researching the infrastructure requirements of a potential cruise ship berth in Esperance including at the Tanker Jetty. This report included representation from Tourism Esperance, Southern Ports Authority (Esperance Port), Esperance Chamber of Commerce and Industry, Tourism WA and Shire of Esperance. The GEDC commissioned specialist coastal and port engineers M P Rogers and Associates Pty Ltd (MRA) to undertake a review of the current infrastructure available within Esperance for the berthing of Cruise Ships and also to provide some concepts that may optimise Cruise Ship visits to the region. The GEDC have approved this report be available for community members to see the full impact and potential costs of cruise ship infrastructure. Please note all costing information is on concept designs only.

There has been much newspaper coverage of the Tanker Jetty through the years. You can find just some from the past 5 years here.