The Dempster/Andrew Street Roundabout is set to receive an upgrade to help improve safety and traffic flow for vehicles and pedestrians using the roundabout. 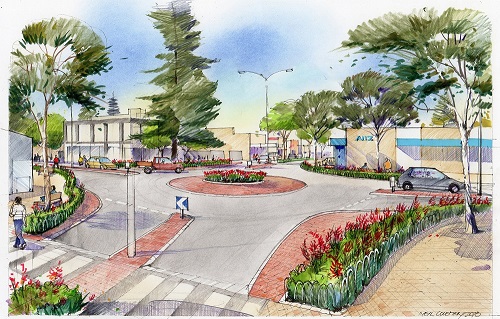 What are the issues with the current roundabout?

What improvements will this project achieve?

Is this project costing rate payers?

No, the project is fully funded under the National Blackspot Program.

Why is this intersection a blackspot?

There have been seven car crashes over the past five years with five of those crashes being right angle, commonly known as a T-Bone. The high number of right-angle crashes is of concern, as generally these should not occur at roundabouts.

Can the money be spent on another project?

No, the funding has been offered to the Shire for this project only. The National Blackspot Program prioritises projects and the funding would need to be returned.

The new roundabout will be similar in construction and size to the roundabout that is located at Dempster and James Street, this roundabout was upgraded a number of years ago.

Landscaping will be commenced once construction works are completed and be combined with a landscaping project happening in Andrew Street.

The project will commence in May 2019 and will take approximately 12 weeks to complete. The works will be programmed to minimise the impact on businesses and traffic. Traffic management will be in place, with the works done under traffic or outside of the towns busy hours when road closures are required (expected to be mostly on Saturday afternoons, Sundays or during the evenings.)

The following is the proposed staging of works: